Left to right:  Christopher 'Luda'-Chris Hamre, Steven Goldsmith (editor of shortsupport.org, now gone from the Internet as of 5/2019) and Scam-Artist Matthew Campisi formerly of Babylon New York.  Campisi started the website - www.nossaonline.org in September 2005 and fraudulently represented it as a legitimate incorporated non-profit organization named 'National Organization of Short-Statured Adults, Inc.'  unknown to Hamre, Goldsmith or myself at the time.   Hamre was supposed to be the Vice President and Goldsmith the Treasurer. (Campisi had asked me to be Secretary of what was  fraudulently represented to me to be a legitimate incorporated non-profit organization in September of 2005, and I accepted) Campisi only formed the previously fake incorporated non-profit in November of 2006 after I had discovered Campisi's scam by having Secretary of State's jurisdiction searches done for 'National Organization of Short Statured Adults, Inc.' in the late summer of 2006.  The searches revealed no National Organization of Short Statured Adults, Inc. anywhere in the U.S.  I then made complaints to state agencies and it was only after Campisi was notified of these complaints that the so-called 'National Organization of Short Statured Adults, Inc. was formed by Campisi in the State of New York while Campisi was a resident of Pensacola Florida.  Campisi responded to at least one state agency with more than one false statement about me in an apparent attempt to implicate me in his illicit act('s) after I discovered his fraud  and made my legitimate complaints.

The above 'elevator video frame' was shot in an old NYC high-rise office building the weekend of November 18th 2006, only 4 or 5 days after Campisi actually formed the previously fraudulent National Organization of Short Statured Adults, Inc. due to my complaints to state agencies.  For nearly 8 years Campisi used Hamre as a front man, gofer, stooge and all-around dupe, both while the website was being fraudulently represented and after.  Both Campisi and Hamre are very likely wearing Height Increase shoes in the above elevator shot.  Talk about hypocrisy!  Since NOSSA's real inception on November 14, 2006, only Matthew Campisi had access to the important part of the NOSSA website, that is, the ability to log in and determine exactly who paid money in membership fees and who donated money.  He kept this ability all to himself from that time until the present;  in other words, Campisi was the only person who knew exactly how many NOSSA members there were, (There weren't many) how much money was being taken in, in memberships and donations, and also very likely keeping that knowledge all to himself as well as any monies collected.   It was only after the webmaster's forceful exit in 2006 from the then falsely represented NOSSA website (falsely represented by Matthew Campisi and Matthew Campisi alone), and the later exit of Steven Goldsmith, Brian Peterson, "Dr." Deborah Burris-Kitchen,  and Devin Love-Andrews that the dupe Christopher Hamre actually left the previously fake NOSSA, Inc.   Unlike others interested in combating heightism who began  by posting comments on message boards, Campisi literally came out of nowhere to seem to start an "organization".  Campisi also had what appears to have been another sham that we could find called 'Agitatethesystem' way back in the late '90's where the failed singer Campisi was seemingly representing himself as some sort of booking agent for indie rock bands in Long Island New York.  Campisi's recently discovered 2008 hardcore pornsite interview with naughtyamerica.com has also raised suspicions about Campisi's possible participation in hardcore Porn.   Campisi was also living a lifestyle that far exceeded his apparent ability to afford based on his known wage earning.

Campisi has lived all over the country in the last 20 years with about 19 addresses in New York, Virginia, Georgia, Florida, Louisiana and Alaska, in addition to living in motels and his car.  In 2012 Campisi threatened to kill his wife according to a Nassau County Florida Police 911 Complaint and Report made on May 29th 2012 in Yulee Florida by his wife Rebecca.  Campisi appeared to have disbanded the previously fake incorporated non-profit in 2013, however, as of August 2019, the New York State Secretary of State's Office still has NOSSA, Inc. registered as an 'Active Corporation'.  We believe that Campisi is keeping the so-called National Organization of Short Statured Adults, Inc. active as a corporation in New York State  out of fear that we will appropriate the name 'National Organization of Short Statured  Adults' and re-start the organization under the same name.  On another sour note, our information also informs us that Campisi made a woman pregnant in Alabama back in 2009, WHILE his own wife was pregnant with their 5th child.  Campisi has since relinquished all legal rights to the child.  At last report Matt 'The Snake' Campisi was living in Savannah Georgia and working at Ft. Stewart as a civilian employee.  We don't expect him to return to scamming short people. 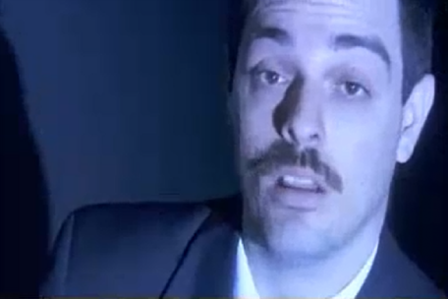 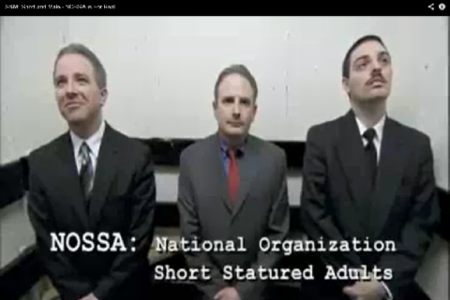 From left to right:  Christopher 'The Smirk' Hamre, Steven Goldsmith, and Matt Campisi.