In this broadcast Joe and Brent hammer away at the core of people that set up double-standards for short people and short men in particular.  A rabble-rousing broadcast that hits hard at all the hypocrisy of those who refuse to recognize the existence of the heightism phenomenon.

Joe talks about the "casualties" of trying to fight heightism, that is, the people who came and went.  Joe talks about 'positive attitude gurus', feminized short guys, then covers the Oxford study that took 60 disturbed women and used it as a labeling device against short men.  He also covers the two worst people of all-time with respect to short men, and short men like comedian Dai Henwood who willingly sell-out short men to further their own finances.  The founder of the Heightism Report adds his amazing insights to all of this.  This is a 3-part broadcast (and one of SFTS's longest broadcasts). that you don't want to miss!

An anonymous rock star comes forward to discuss heightism.  Such is the stigma surrounding the discussion of heightism.

The webmaster discusses the arbitrary indignities that short people suffer, often willingly.  The photo below is a good example of this.  This photo is discussed in depth in the broadcast.

Broadcast of December 16, 2014
In this broadcast Joe discusses Reddit/r/short as well as the well-known poster there named "Geoffrey Arnold", the "Garmins" of reddit, sperm banks, women's attitudes about having a short son, and a lot more.  The creator of the Heightism Report adds his experience in exposing the usual hypocrisy and double standards relating to short people and short men in particular 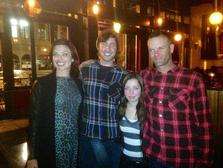 Joe interviews Anita Sulser who has the blog - Quantummediocrity.wordpress.com and is the author of 'Heightism - An Observer's Tale'.  Ms. Sulser corroborates much of what has been said by the webmaster along with many Internet posters who discuss personal experiences.  Cohort Brent then picks up the pace to add his incredibly accurate analysis of the entire heightism phenomenon.  A must listen-to!!!

Joe interviews Dave Robinson of 'Under five eight', a dating site in the UK.

Joe interviews Leslie Rott Ph.D.  The first woman interviewed on the issue of heightism, Leslie Rott, the author of “You’re so Short!”: the Stigma (and Disability) of Being a Short Woman".  This is a barn-burner of a broadcast where 3 intellectuals get together for the first time.  The Heightism Report included!  This is a MUST listen to!!!