Kevin Hart's photos with other almost always show him "leaning in". 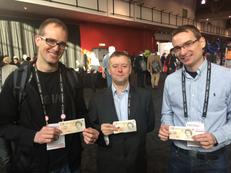 This broadcast is a continuation of the last broadcast of December 24, 2014.  The webmaster continues his discussion of zone of space violations and demonstrates how people are callously indifferent to the arbitrary indignities directed at short people (An opportunist named 'Coach Corey Wayne being one example, by betraying his short friend and literally blaming him for his own murder after standing up to a bully in a club).  Joe discusses two videos and how in both these videos the person doing the violating of other people's zones of space is a tall person.  He discusses the psychodynamics of these indignities and demonstrates that these violations are based on very simple principles.

In this broadcast Joe discusses more 'Tall people violating short people's zone of space' videos and clearly demonstrates how height - Taller Height - is the '800 pound gorilla in the room' that enables the people who make these videos to do what they're doing.  Their Tall height provides them with the confidence they need to violate other peoples' personal zone of space without fear of reprisal; people who are almost always shorter or smaller than they are.  Their confidence is developed through the respect and admiration they've received from a lifetime of reinforcement from society, from a physical advantage that they did not earn.   If the people who make these videos make a point of violating ONLY shorter or smaller people's zone of space, then it pretty well proves exactly WHO these arbitrary indignities happen to in the first place in every day situations.  This is a MUST listen-to broadcast.  See Videos below -

The webmaster discusses two short men, little Martin Widlake and the buffoon named Kevin Hart.  Martin Widlake has a blog and is depicted below. The short man "lean in" is also discussed whereby short men stand on the outside of a photo and "lean in", in an attempt to convey the image that they are taller than they actually are, that their short height is just an "illusion" because they're "leaning in".  When short men are in photos between two or more Tallers they have a tendency to be the only ones NOT smiling as little Martin "Luther" Widlake demonstrates.

Broadcast of March 2, 2015 - Zone of Space Violations IV
- Joe finishes up with zone of space violations and then explains one of the most important aspects of heightism.