This broadcast is a blockbuster..  The webmaster exposes the Scam called "Heightboard".   Totally fake accounts are being set up to scam the rest of the legitimate posters .   They use these fake accounts to enhance their message boards , to  convey the false impression that lots of  people are posting there to attract members, and also to "gang-up" on posters they don't like, especially short men who get "out of place".   Then they fabricate so-called 'legitimate reasons' to ban posters that get out of line with their agenda.  We expose their shenanigans and the typical hypocrisy of  these types wanting to protect their turf .

The scam artist who started the website www.heightboard.com has had this notice on his messageboards since October 1st:

"The forum is locked. You can read the threads but posting is prohibited for all users at the moment."

Yeah right!   Just ask yourself a simple question:  Why would a message board suddenly suspend posting?  I've been on the Internet for 20 years and I've never seen this happen before.  Why would the admin('s) not give any reason for it?  Well, we think we know why.  The scammer over there has gone on vacation and he has no one to monitor the posts there.  What's that you say?  He's got multiple admin's and mods.  No he doesn't.  He's fabricated the other admins and mods.  He's either gone on vacation, has had a hospital stay and he can't monitor his message board, or he's listened to our August 22nd broadcast and is afraid that we know his identity and is running scared.  We like the way he says, " posting is prohibited for all users at the moment".   Yeah right!  Some "moment".  A two-and-a-half week moment at the present time.   If and when this "heightboard" scammer reinstates posting, this guy is probably going to say something like,

"We've reinstated posting for members.  Sorry for the inconvenience, but we had to add new software to make your experience a more enjoyable one".  Or perhaps something like:  "Now we have new rules for members and we've added several new features that will enhance your experience here."  Or some such BULLSHIT like this.

Back in 2017 the webmaster became a poster on heightboard.com, which was an online forum touting itself as "The #1 height forum".  I had made a few posts there, and suddenly found myself getting attacked by several posters, some of which were fake accounts set up by one person posting in multiple guises which was unknown to me at the time.  After a several threads of this I ceased posting there.  Because more than one poster posted in a similar fashion I came to the suspicion that one or possibly two people were posting under more than one identity to create the illusion of multiple people.  I eventually got my proof that I was correct.  My August 22, 2018 broadcast deals with this topic.   See below:

I guess I should say, "I told you so".  We might have known this would happen.  Just type in www.heightboard.com in the address bar of your browser and you will see the message:

If you type in your address bar - reddit.com/user/paulruggiero/comments - you will get:

This two-bit fraud, member of a political troll-army, ANTIFA member, Shadow moderator in the employ of reddit.com, and one or two other things, thought he could fool a little shrimp.  He thought he could put one over on the webmaster.  Now his precious heightboard.com is nothing but a memory.  All the fake identities that he fabricated to enhance his message board in the hope of making advertising revenue AND put little shrimps in their place, is now part of history.  All the fake identities this guy thought up, like "Paulus", "Springfield", "Austin", "MrBumble", "TheDoc", "RickyG Super Moderator", etc., all of that are now gone and will fade into the dim mists of time. One of his online identities - "Paul Ruggiero" - is now also part of history. Both heightboard.com and the "PaulRuggiero" reddit account disappeared at almost exactly the same time. This dirtbag realized that we were getting dangerously close to discovering his real identity, so he cashed in his chips and went south for the winter.

This character joined the 'heightismhub' recently as "lloydrogers" and put the webmaster's name and photo into at least one blog in an apparent attempt to impugn his name, and also registered at the heightismhub as "shortguytom", in a vain and pathetic attempt to put the webmaster on the psychological defensive.  Both attempts failed at their intended objective.  Now Mr. heightboard.com has been forced to take his forum down, and has deleted his reddit account under the name "Paul Ruggiero" since the webmaster's last two broadcasts.  We don't expect heightboard.com to return to the Internet.  We also don't expect "Paul Ruggiero" to return to reddit.com anytime soon in the original "Paul Ruggiero" identity.  We do expect this low life to continue his political agenda under other guises and covers.  We do expect the troll army that he is a member of to continue their political war.  We do expect members of his "group" to continue THEIR Internet war.  However, this guy is now through degrading short men.  He and his "heightboard" are now finished in this regard, and if he ever returns, we'll be waiting for him.

The above are just a few of the many fake identities set up by the Administrator at heightboard.com 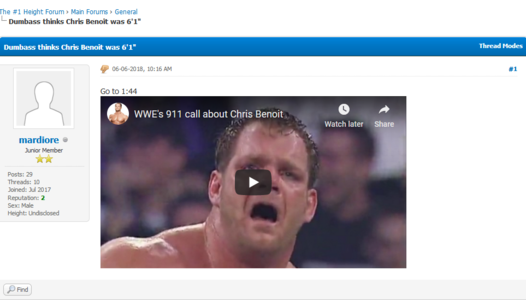 I believe we've discovered the identity of the person who started the famous www.heightboard.com, the self-proclaimed "#1 height forum" and who was fabricating many accounts and posting under those fake accounts in an attempt to attract members to his forum and increase its size and thereby enhance it, and also to gang-up on anyone viewed as a threat by portraying a fake image of many people attacking one or two people, thereby chasing them away.  My source has discovered the identity of this guy.  His online name is "Paul Ruggiero', which may or may not be his real name (something we're still looking into).  He has been a poster on reddit.  His page where you can see his posts is:

I've looked over a good number of his posts and am now convinced that this is Mr. heightboard himself, the scammer who viciously attacked not only myself, but several other people under the guise of multiple posters.  I now believe this because in reviewing his posting history I've found several similarities to posts at heightboard.  This Paul Ruggiero has a habit of calling people "dumbass", which is a word used to describe myself on heightboard when I was posting there.  Here's a comment of his on reddit:

"Europe is not a country, dumbass. And the US isn't paying for anything. I suggest you stop getting your news from Alex Jones."

On heightboard there are also uses of the word "dumbass" ---

Here's another use of the word "dumbass" on heightboard by lambo33:

Here's a post by the famous "Austin" using the same "dumbass" when referring to me:

The following is the title of a thread started by someone describing themselves as "Mardiore":

You'll notice the use of the word "dumbass" yet again.   Harking back to the post Paul Ruggiero made on reddit:

"Europe is not a country, dumbass. And the US isn't paying for anything. I suggest you stop getting your news from Alex Jones."

There is no doubt in my mind now that "Paul Ruggiero" is our heightboard man.  By the way, on reddit.com/r/beholdthemasterrace he posted this:

"He looks very small. I bet he's no taller than 5'4". Have you guys noticed how a lot of these White Supremacists are much shorter than average?

How coincidental!  A reference to short men being "White Supremacists".  Imagine that?!  He also likes to name-call a lot; as a matter of fact, many or most of his posts are nothing but name-calling.   This guy typically calls anyone who disagrees with him a "redneck", "White trash", "trailer trash", "Magtard", "bitch", "Cletus" and other choice names.   Another "proof of the pudding" is the fact that "Paul Ruggiero" made his last post on reddit about a month ago, right about the time that his forum "heightboard" was no longer accepting posts.  Apparently "Paul Ruggiero" (if that's his real name) had decided to fold his hand and cash in his chips, not only on heightboard but also on reddit.  I believe that this guy was scared out of his wits that I was going to find out who he was.  Well, he was right.  Once again we've proved ourselves worthy, in our judgements of two-bit scam artists like this guy.  This is the Scumbag that accused me of being "paranoid" on his famous message board.  Well, I think we see now, that this guy was what I pegged him to be all along.